Christmas Films To Watch To Get You Buzzing For December

It’s almost that time of year again and we cannot wait! December is quickly approaching and that only means one thing, curling up on the couch with a blanket, some snacks and a hot chocolate and watching some Christmas films with your flatmates – wholesome vibes.

We all know the classics to whack on for the holiday season, but what’s new for 2022?

Well, lucky for you festive fanatics we’ve got you covered with our guide on Christmas films to watch.

Don’t stop there, get yourself buzzing for the hols and add these to your watch list… 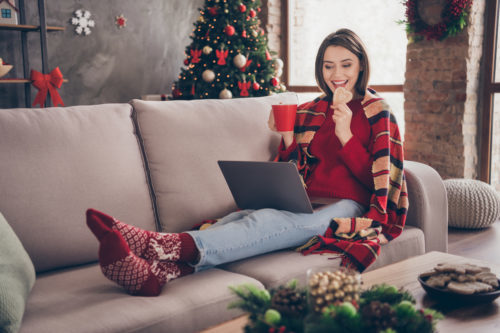 If you don’t live under a rock, you will have heard that Lindsay Lohan is returning to acting for the upcoming American Christmas romantic comedy film, Falling For Christmas.

Is a rom com really complete without the queen herself? We cannot wait for this one!

The feel-good film also has other big-name actors like Chord Overstreet and George Young and tells the story of hotel heiress Sierra Belmont, who experiences a skiing accident at her engagement.

After being diagnosed with amnesia, she finds herself in the care of the handsome lodge owner and his daughter.

Get in the holiday spirit and switch on Netflix from the 10th of November to watch with your flatmates or treat yourself with a self-care night and cuddle up in bed to stream!

If you haven’t watched the trailer yet then what are you doing?! Watch it below to get excited for this must-see Christmas film.

Another Christmas film new for 2022 that you NEED to watch is Violent Night.

Whilst this one isn’t gonna be on streaming services for a while due to only being released in cinemas from the 2nd of December, it’s for sure one you need to see during the festive season.

Starring Stranger Things star David Harbour, Violet Night is an American Christmas black comedy action film which tells the story of a group of mercenaries who attack the estate of a wealthy family on Christmas Eve taking everyone hostage, and Santa must save Christmas.

It’s already had raving reviews from Comic-Con so we’re sure this one will be worth heading to your local cinema for (and splashing the cash on a Tango Ice Blast).

If you’re someone who loves hilarious Christmas films like Elf and Home Alone, you’re gonna love this one!

Watch the trailer below to get yourself prepped for December…

Next up to add to your movie calendar for Christmas is Spirited, starring our festive fave Will Ferell and Ryan Renolds, this one is certainly one to watch for the holidays.

This Christmas-themed comedy film is a musical version of Charles Dickens’ story of a miserly misanthrope who’s taken on a magical journey.

The story follows the Ghost of Christmas Present who selects one dark soul to be reformed by a visit from three spirits.

You can sing along to this musical on Apple TV from November 18th or go and see it on the big screen in cinemas if you fancy it!

Watch the trailer to see what it’s all about yourself and get the excitement flowing.

The Noel Diary is another Christmas film to watch for 2022, with This is Us star Justin Hartley playing the main character.

Coming to Netflix on the 24th of November, this holiday romance tells the story of a man named Jacob Turner who returns to his childhood home on Christmas to settle his estranged mother’s estate.

He then finds a diary and meets a woman searching for her birth mother, uncovering some secrets about both of their pasts – but what are they? You’ll have to watch to find out!

Based on the bestselling book by Richard Paul Evans, this Christmas flick is for sure one to curl up on the couch and watch on a rainy December day with your flatmates.

There’s no trailer as of yet, but keep your eyes peeled to get a sneak peak of this Netflix film.

Another film that we reckon you’re gonna love is the upcoming holiday romantic comedy, Christmas With You. Multiple rom coms to watch in one month, aren’t we lucky, eh?

Featuring Aimee Garcia and Freddie Prinze Jr the plot focuses on a pop star whose searching for inspiration for a hit holiday song and escapes to a small town where she finds not only inspiration but true love along the way (wholesome).

Is it just us or is this giving Hannah Montana the movie vibes?

Coming to Netflix on November 17th you’ll be in the festive mood with this one. Get together with those you live with and have a movie night with some popcorn!

If you’re wanting to see what the films all about, check out the trailer.

Another film focused on Charles Dickens’s cult Christmas story? Oh go on then!

This animated film new for 2022 tells the story of the classic tale of A Christmas Carol encase you didn’t already guess; however, it’s set to take a musical twist and we’re living for it.

Netflix have stated it’s said to be a supernatural, time-travelling, musical adaptation of the Christmas story so, we’re sure this one will be a great cosy watch for a winter’s night.

You haven’t got long to wait to watch this Christmas film with a release date pending, it’s said to be on Netflix in December.

Unfortunately, there isn’t a trailer to get your excitement flowing but we still reckon this will be a great watch.

If you’re not a fan of animated films, give the original film a watch! 7. The Guardians of the Galaxy Holiday Special

If you’re a Marvel fan (let’s be real who isn’t) then you simply must give The Guardians of the Galaxy Holiday Special a watch.

Coming to Disney+ at the end of this month this action-adventure film follows the Guardians, who are on a mission to make Christmas unforgettable for Quill, as they head to Earth in search of the perfect present.

Whilst this isn’t your typical festive film, if you’ve seen the other Guardians Of The Galaxy films then your gonna love it just as much as we are. Get ready for the holiday season on November 25th with this special!

Find out what to expect from the trailer below.

The festive season is the perfect time to get together with your flatmates in your student accommodation and enjoy the best Christmas movies.

We hope our guide on Christmas films to watch has got you buzzing with excitement for December – Happy Christmas viewing!

If none of these films have tickled your fancy, then are so many movies and series to get you in the mood for December with classics like Love Actually, Die Hard, How The Grinch Stole Christmas and Miracle On 34th Street – the choice is yours!

Have you failed an assignment, essay or exam? Have a read of our guide on Tricks And Hacks to help you out!

Our Top Tips For Having A Sustainable Christmas

The ULTIMATE List Of Gift Wrap Hacks For Christmas

The ULTIMATE Guide To Winter Wonderland 2022